Thursday, October 13 was the opening night for the Homage to the Holga exhibit at the Argus Museum.  It was also the start of the annual Argus gathering at the museums, so there were quite a few familiar faces of Argus enthusiasts that had arrived earlier that day.  Overall, it was a fun evening, but we were a bit surprised by the lack of attendance of others in the A3C3.  Maybe it was the timing, but it would have been nice to see about a dozen more people show up that night.  For those that came, thank you, and I know that you enjoyed the exhibit.  There were 8 photographers in the show: Robert Beech, Bill Bresler, Jason DeLeon, Dawn Gardner, Heather Gardner, Pam Guenzel, Mark O’Brien, and T. Paul Wrobel.   If people came expecting fuzzy images and light leaks, they would have been surprised at the quality and subject matter of the images.  Keeping true to form, I used a Holga with a potato-masher flash to take candids during the evening. 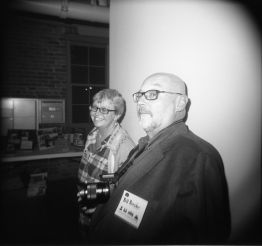